Surely you have wondered why the most modern and fast USB WIFI adapters carry 4 external antennas, and if this really increases the speed and the features of the WIFI adapter. Actually yes, it is necessary to carry 4 antennas, to overcome the speeds of 1200 Mbps of WiFi transmission.

4T4R is the default configuration for 5G type experiences in the WIFI environment that is currently used. The potential speed and coverage capabilities of 5G mobile that will come in the future is anticipated by the WIFI 4T4R system that we present in this article.

The most advanced WIFI AC technology takes a 4T4R configuration to allow high wireless power with four external antennas. The main characteristics of this 4T4R equipment is its simultaneous dual band Wi-Fi AC high performance, compatible with all 802.11a / b / g / n / ac standards. The four antennas are to create 4 channels of data transmission and have up to 600Mbps in the 2.4GHz band,

The new Gigabit dual band routers also have Wi-Fi AC MIMO 4T4R wireless standard that transmit at speeds above 1200Mbps but we will only get the maximum performance if we have MIMO 4T4R clients,

MIMO “Multiple Input Multiple Output” is used to allow more WiFi speed using several antennas simultaneously, MIMO technology is achieved with less data loss, less retransmissions are needed and the speed increases. Thanks to this configuration, the wireless signal can reach us by several routes (direct or bouncing against walls for example) and we can use it to increase performance.

This technological wonder of 4 antennas transmitting at the same time only we can enjoy it if we have an access point AP WIFI transmitter, that is to say a router emitting with 4T4R AC technology and on the other side, that is to say as a WIFI client a receiver also 4T4R like this :

The best advice when we have to decide which router WIFI AC you want to consider the peculiarities of WiFi AC is that it works with a double band. On the one hand, the 2.4 GHz band, which is the most common and used by the vast majority of routers, and on the other hand the 5 GHz band, which is less crowded and which, in turn, offers higher performance , allowing the multiplayer game, streaming video in Full HD and 4K in several home devices, going through P2P downloads on several computers at once. In general the WIFI AC system is imprescidible for an intensive use of the internet connection.

It is important to know that the maximum speeds are announced by adding the two bands, so if we only use one band, such as 2.4Ghz, we will get 600 Mbps maximum even if the router is 1900AC. But even so the 2.4Ghz band still has advantages because it is slower, but has greater coverage and range in distance, while the 5GHz band is much faster but does not go that far. To learn more about the advantages of WIFI AC see this article.

Therefore, it is a good idea to use 5Ghz for devices that are going to be connected near the router and need a lot of speed and use the 2.4 GHz frequency for farther devices or take the internet to other nearby buildings with WIFI repeater systems like the famous one pack Long range antenna and repeater router OpenWrt SILICEO. This long range pack can receive WIFI up to 1000 meters d edistancia and repeat it with a router of 2.4ghz for the whole house, they are only 150 Mbps but enough for that range.

A Gigabit router with WiFi AC and the technological wonder that every Gamer or online worker wants to have nearby.  Only with changing the router will we significantly improve the performance of a network in our home or office. Finally, in 2021, fiber optic offers ultra-fast internet connection speeds, but what does it do if the routers installed by internet operators become obsolete? But Alfa Network has thought about this and offers us solutions both on the side of the router or access points and on the side of the WIFI client.

The new ALFA NETWORK AC1200R router Includes four gigabyte LAN ports to connect wired products such as smart-tv, video game consoles or computer with cable, PC or other network devices at incredibly fast wired connection speeds thanks to its four 5dbi antennas. The 4 antennas transmitting and receiving signal in 802.11ac at maximum speed up to 1200Mbps. 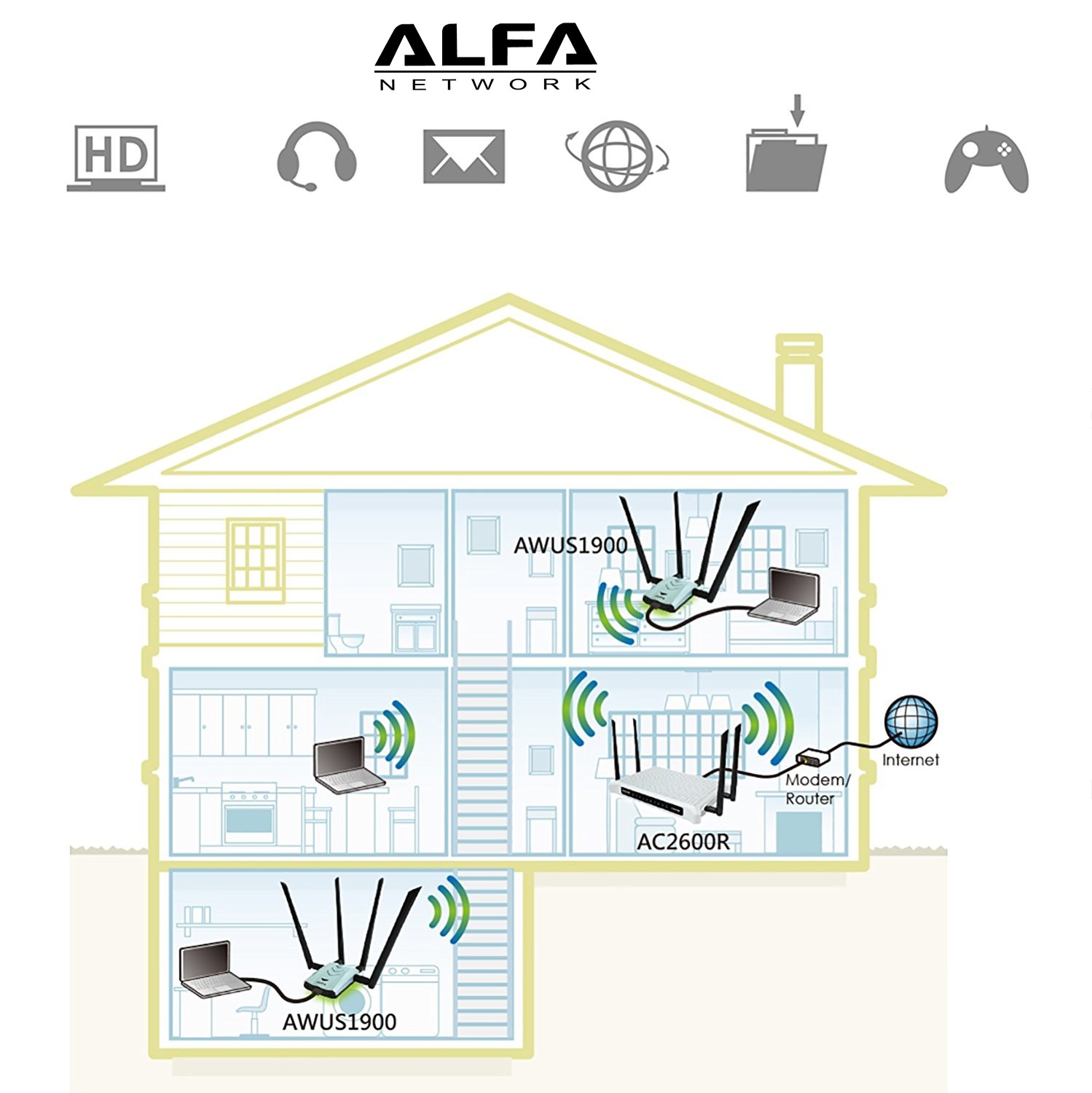 A great advantage of this router with WiFi AC is that it has several Gigabit ports. The ports compatible with the Gigabit Ethernet speed of the AC1200R Router reach up to 1000 Mbps, which you will undoubtedly find if you connect devices through a LAN cable. If you have contracted an optical fiber speed of more than 100 MBps, you are already taking one of these Gigabit router in SILICE ONLINE STORE.

Another useful feature is the QoS (Quality of Service) function THAT S EUSA serves to give priority to some tasks in the network over others. Thus, priority can be given to customers who play streaming video with YouTube or Netflix or to play online as a priority.

The Alfa Network AWUS1900 dual band model is a new WIFI client receiver with 4 4T4R antennas. eL CHIP realtek RTL8814AU It is compatible with Microsoft Windows 7, 8 / 8.1 and Windows 10. Installation in Windows is very simple, it connects to the USB port of your computer with an included USB 3.0 cable and instantly increases the Wi-Fi performance of your computer very significantly. Its four-transmit / four-receive dual-band antenna technology (4T4R) allows the use of 2.4 and 5 Ghz radio bands on 802.11ac routers for a combined maximum connection speed of 1900 mbps.

The antennas can be disconnected and expanded or updated thanks to the SMA type connector. This is the evolution of the AWUS036ACH adapter and has a more advanced chipset that allows 4 antennas (MIMO 4TR) 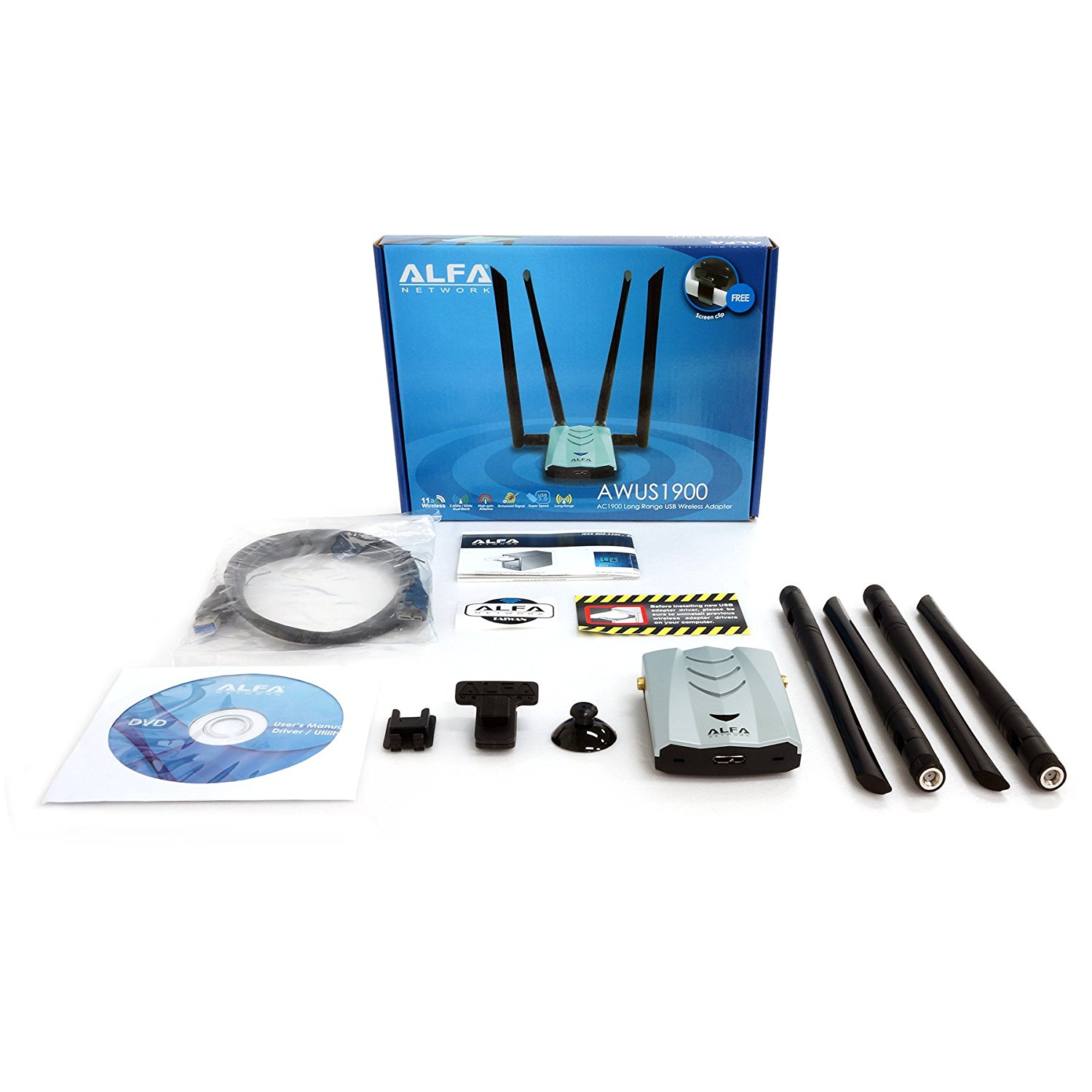 This USB WIFI adapter with USB 3.0 port is the ideal complement to use in combination with a Gigabit WIFI AC router. Definitely with this quadruple WIFI antenna for high speed, combined with an AC1200 or AC1900 router you make sure you get the most out of the fiber optic using WIFI and you are definitely forgotten about interference problems, cuts or low speed in WIFI to work or disfurtar of internet.