The wireless connection or WiFi is the natural access of all our smartphones and tablets to the Internet. Due to the still a little slow 4g network and the excessive price that has the consumption of Gbs of data by 4g in Spain, the WiFi remains the favorite form of connection of the users of mobile and tablet in the 2021. Extending the router’s WiFi is a priority in any large house that only has a router but has several WiFi devices connected at the same time. So today it’s time to talk about the WiFi Extender, what is and what to buy that is quality and fast ?.

The wonderful WiFi our every day has only a small defect, WiFi coverage is weakened with the distance and walls and walls that are on the way from the router to our mobile. As an addition, the mobiles are flat, nice and light, do not carry an external 15 cm antenna so you can connect with quality. Then, as I can attach a good antenna to the phone to take the WiFi signal with quality from afar.

We are not talking about making a home WiFi antenna for the Android mobile or solder an antenna or attach with a connector inside the back cover a cable with WiFi antenna, swim of that is practical and does not work. Forget about putting a beer can to the router to amplify the signal or add antennas to the tablet, are interesting crafts but not worth it.

My sincere, cheap and very effective proposal is that you add a WiFi extender in the hallway of the house or inside your office. If you do it right away you will notice that the WiFi signal becomes quality, much safer than before and without any cuts not slowed down.

This is exactly our proposal today: Buy and install a WiFi range extender.

➤ What is a WiFi extender?

The network extenders fulfill the function of receiving WiFi signal from the router to extend it and repeat it with more power to reach other rooms or spaces of the buildings. In the case that you always connect with the mobile in the same places, for example, the office or the terrace, you do not need to make any exhaustive map of the WiFi coverage, you just need to know which is the area without coverage you want to improve.

The internal design of the WiFi Extender is identical to that of a router, but with basic functions. For example, the router usually has several LAN outputs and the Extender usually has no cable output or has only one. In addition, externally, the WiFi Extender, has an electrical connector attached to facilitate installation in any 220v/240v electronic mains socket.

➤ Best Extender WiFi quality price is the Tenda A301 V2

For only about 27 EUR the Tenda A301 extends the WiFi coverage of the houses to 120 m². The Tenda A301 WiFi a 300Mbps can support the 3 modes of repeater, client and router WiFi and also is compatible with any WiFi router of any brand or company like Movistar, Vodafone, Orange or any other. 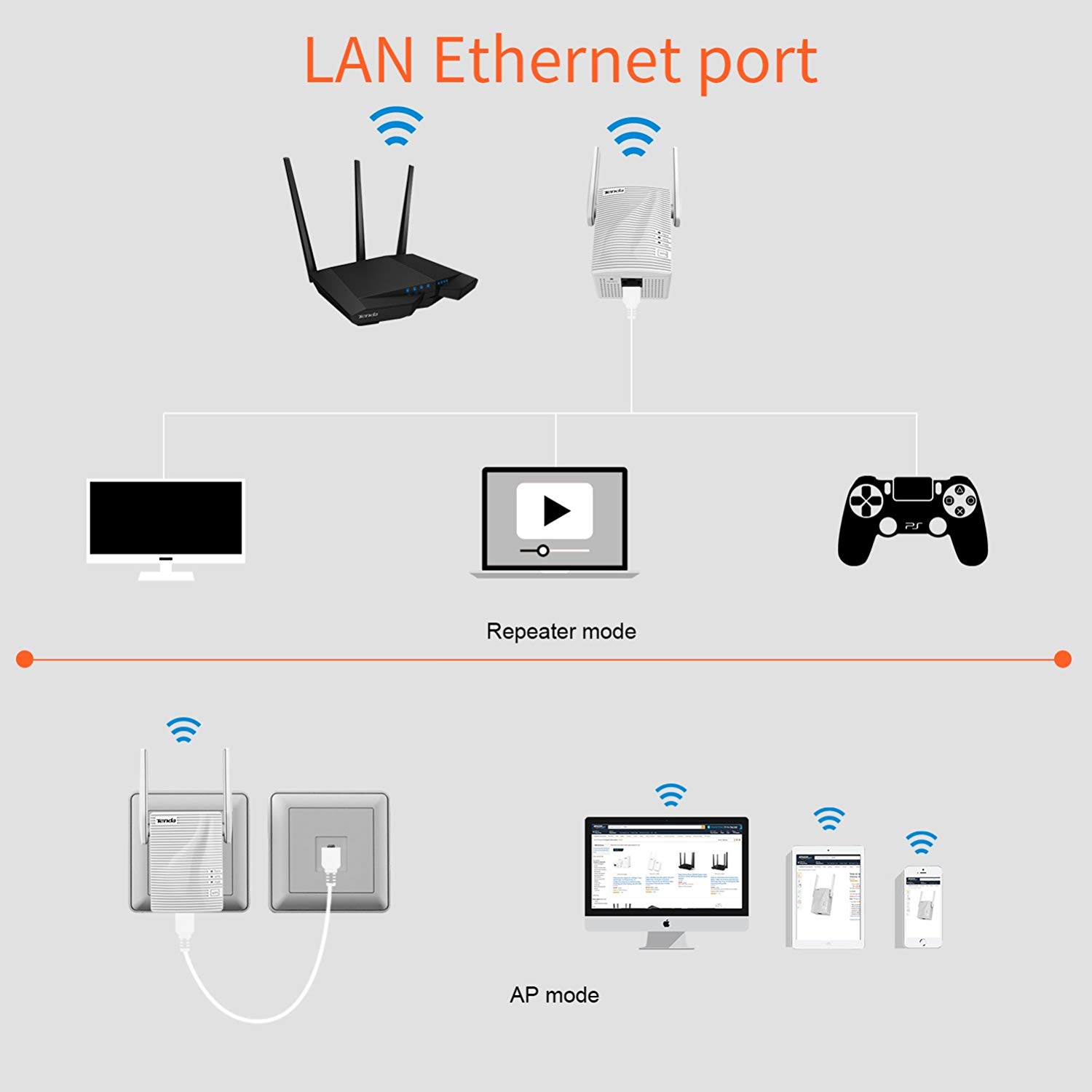 Tenda A301 is a mini-sized WIFI extender dedicated to two-storey houses, or multi-room villas with an area of more than 120 square meters. It grants up to 300 Mbps of WiFi data rate. With two external omni-directional antennas for better signal coverage. In addition the antennas are orientable, the A301 can provide a greater WiFi coverage as well as a faster data rate throughout the house. You can put several if the house is very large and are compatible with each other.

➤ operation of a WiFi extender

This simple and economical device can be known by several names. In some online stores they call it “WiFi bosster“, WiFi repeater, other WiFi amplifier, WiFi minirouter, plug-in WiFi repeater, etc. But all these names designate the same device whose name is more technical WiFi extender.

The WiFi extender works by receiving the WiFi signal emitted by any router, and the wide extending to get farther. When it functions thus actuá as a WiFi repeater, it takes a WiFi signal and repeats it with the same name and password but at more distance and especially with high quality in the environment close to the repeater itself.

But the WiFi Extender is also a router, and therefore can be configured to receive cable and broadcast by WiFi. This second function is very interesting because if you receive by cable you will do with a 100% quality, while if you receive by WiFi there will always be a small percentage of loss.

The third function is the WiFi client. It receives by WiFi and transmits by cable to a computer or to any device with LAN input. This WiFi client function is used for example to connect to a surveillance camera.

For example, in my office I installed a WiFi extender plugged into the computer’s electrical connection strip. The relay connects via WiFi to the main router and gives me RJ45 LAN cable Connection to the computer and at the same time by WiFi to the mobile and tablet.

✅ Place a WiFi extender in the best location

For an extender to work well you have to receive the WiFi signal from the router with enough intensity.

We always recommend two details to be fulfilled:

1-Between the main router and the WiFI extender there must be no walls, there may be a thin wall or partition, but it is better to avoid concrete walls or metal. The WiFi crosses the metal barriers with difficulty.

2-Ideal is an intermediate point, between the router and the devices that are going to be connected, and placed at a medium or high height in the wall, is better than on the ground.

3-a WiFi extender with external antennas is better than without antennas. To know how to orient the antennas of them extenders and the WiFi router read this. >>>>

Some extenders carry a very practical LED light that says with green color when it is well located and red if it is poorly located, but the question is to try to find the ideal site.

The easiest way is to press the WPS buttons at the same time on the router and the WiFi extender. But it can also be done from the configuration page of the extender which is usually the standard of 192,168 or similar. To know how to configure router by IP 192.168.1.1 Read this.

➤ How to purchase the appropriate WiFi Extender

There are currently hundreds of similar products and all are going to fulfill the function of extending the WiFi signal, but there are details that differentiate them. Here are the three tips you should take into account.

1-Better a WiFi extender with external antennas. The ones you see in the pictures with external outside antennas will give us much better coverage.

Here you have examples of WiFi extenders, or repeaters, is the same, which we recommend to buy

If you don’t mind spending a little more money watch one with advanced beamforming type WiFi technology that is smart and emits the WiFi signal exactly to where the devices are located, to improve the speed.

The speed is also very important, before buying you have to look if the main router is dual AC band that gives between 600 Mbps and 1900MBps, then you have to put a WiFi extender that also supports that speed, but in most cases is enough with one of 3 00 MBps, especially if the contracted speed is 100mbps or less. 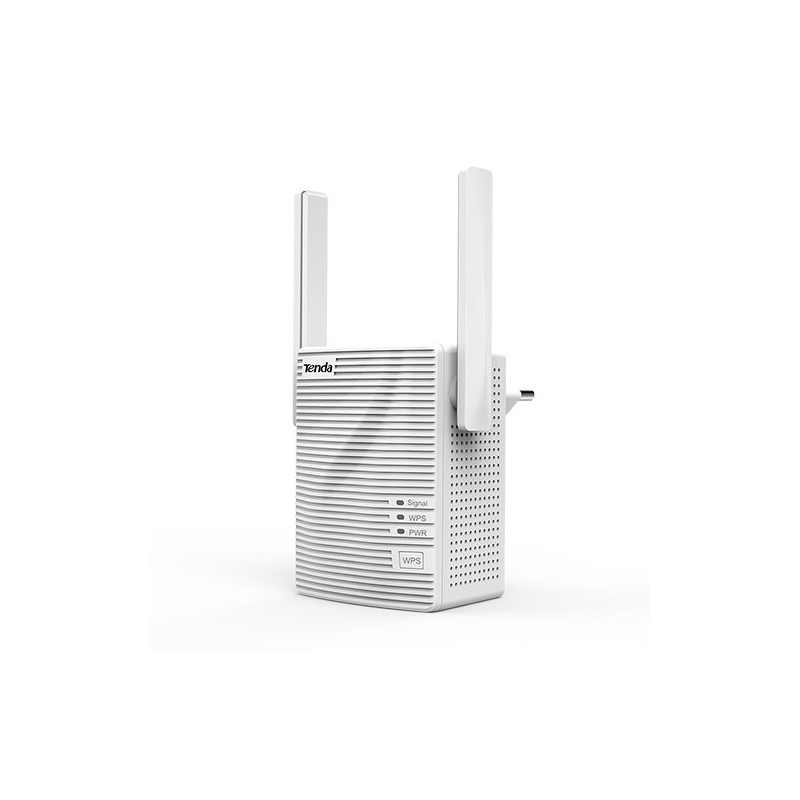 The Tenda A18 WiFi Extender is a double banded repeater. Designed by Tenda WiFi for Spain and dedicated to large homes that need a lot of data rate up to 300 Mbps in the 11n band and 867 Mbps in the new 5GHz band 11 AC. With two orientable external omni-directional antennas so that the A18 can provide greater WiFi coverage. Works well with all new Gigabit router and 2, 4gh and 5 GHz frequencies supported (dual band WIFI)

These are the two examples of WiFi extenders cheaper, powerful and simple to install, but there are many more. Check out this link from the SILICEO Online store or ask us for WhatsApp or Email ?