When we want to establish a long distance WiFi connection we need to establish a WiFi bridge. This bridge can be used to network two computers and also to share internet from one router with another remotely located router. These types of connections are called WiFi bridge.
The simplest way to reach any user is to use two WiFi antennas connected point to point.
With two high quality antennas facing each other like the Alfa AGA-2424T, connections can be established over 10 kilometers and even 15 kilometers.
A long distance connection can also be made with two antennas Panels, but if the distance is very long, and we want to ensure an always optimal result it is more recommended to use two high gain parabolic antennas.

The WiFi bridge allows you to connect a network to another remote network so that you can share all the resources and also the internet. Network bridge devices always work in pairs. Therefore direct vision is needed, and two similar units faced, a unit must be placed at each end of the network. When a WiFi connection is established between both bridge units, the two networks become a single network.

Installation of a WiFi bridge point to point.

A practical idea is to test the units that will be part of the installation in the same room to check their operation and then move them to their final location.

Now there is an easier and more affective way to create the WiFi bridge by getting the Alfa Network WiFi bridge kit. This kit consists of the AGA-2424T satellite dish, the 3 meter cable with N-to-RP-SMA adapter and the AWUS036NEH USB adapter with RT3070 chip. Reference AGA2424-AWUS036NEH

This 24 dBi satellite dish is the best antenna we have tested for long-distance point-to-point installations. In most cases you can get a higher quality signal than yagi antennas of the same gain. As always when we talk about the installation of powerful WiFi antennas to connect to a long distance, the alignment of the two antennas is important. To learn more about orientation and alignment of WiFi antennas read this article >>.

With 24 real decibels, this WiFi directional parabolic grid antenna has a narrow beam width with a steering angle of 10º vertical and 14º in horizontal. In this way the WiFi signal is fully directed and eliminates all kinds of interference from neighboring networks

The Alfa Networtk AGA-2424T antenna is ready to be placed outdoors. Manufactured with an aluminum alloy and protected with a durable finish, the grid-shaped GRID design has very little wind resistance so it will not be thrown or moved during gales. 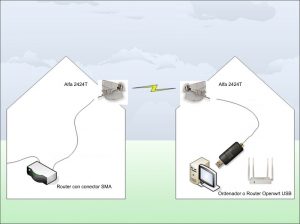 With two antennas aligned point to point you can establish a Wi-Fi connection of up to 10 km. These antennas will always work better with a direct line of sight between the two points.

How do the directional WiFi antennas work?

First, the appropriate antenna must be attached for each frequency of wavelength. The WiFi b / g / n works at 2.4Ghz but if we want to establish a 5Ghz point-to-point connection we must use the appropriate model that is the Alfa Parabolic WiFi 5Ghz AGA-5828T
For this reason it is not advisable to use home-made or modified WiFi antennas since we do not know exactly the frequency at which they can work or the range. A 2.4 GHz antenna will not work with a 5 GHz WiFi signal and vice versa. If it works, it will not work properly and the range will be unpredictable. Therefore make sure that the antenna you are using is designed for the correct frequency band. 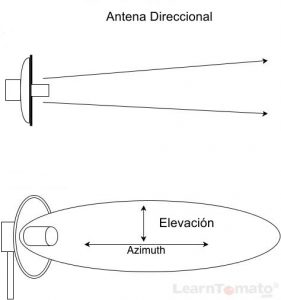 A WiFi antenna has three different parameters in relation to the transmission of radio waves:

The address refers to the shape or angle of the transmission that describes the coverage area. The polarity is the orientation of the electric field (the transmission itself) of the antenna. Gain is the amount of energy increased by the RF signal.
Wi-Fi antennas have two frequency planes. The horizontal plane (also called “Azimut” or “plane H”), and the elevation plane, (also called “E plane”). The following image illustrates the transmission pattern of a directional antenna.

What is a directional WiFi antenna or directive?

It can be compared to directing or directional antennas with a jet of water from a sprayer tap, the jet is directed in a straight line covering an area with a certain angle. Because the directional antenna focuses its energy in one direction, it is the appropriate antenna to control the direction of the emission, or to receive a long distance emission. The directional planes of the WiFi antenna are narrower and more focused than in an omnidirectional one.

The directional antennas are differentiated by their shape in Yagi, with the shape of a tube, planar panel with square shape and parabolic. As we recommend in this article, the WiFi satellite dishes are the most recommended for point-to-point connections as they give the best result and are easier to orientate.
The work of the satellite dish consists in reflecting the signal of the rear reflector and concentrating it in a central point. The width and elevation of the coverage are comparable to those of a Yagi antenna.

What is the polarity of a WiFi antenna?

To establish a point-to-point connection, it is very important that the polarization used by the two antennas be the same. The transmitting and receiving antenna must use the same polarity. The factor of the installation with the correct polarization is fundamental to get a good connection. To properly install the AGA-2424T antenna with the correct polarity, follow this scheme published by the manufacturer ALFA NETWORK. 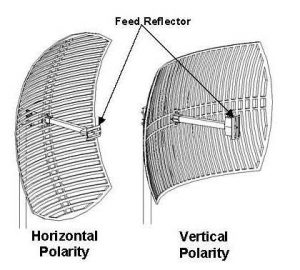 What is the gain of a WiFi antenna?

Many times we wonder which is the WiFi antenna with more power or more gain in the world. The question is difficult to answer since the emission power depends on the router or the WiFi adapter and is limited in the factory due to legal restrictions. On the other hand, the gain is related to the size and shape of the antenna. For this reason the WiFi satellite dishes are usually the most gain and those that can transmit more power outdoors.

The distance and the emission strength to which a WiFi antenna can be connected always depends on the gain of the antenna. Sometimes we talk about “power”, but what we really mean is “profit”. The power of WiFi antennas is not measured with the output power but is called “gain” and is measured in a relative unit known as decibels or “dBi”. For the transmitting antenna, the gain is the measure of how well the antenna converts the transmit power into a radio wave that can be sent. For the WiFi receiver antenna the gain is a measure of the quality with which the antenna receives the wave from and then converts it to the electrical power that transmits the connection data.

What is the relationship between mW, dBi and dBm of WiFi antennas?

The output power of a WiFi adapter can be measured in Watts or milliwatts.
dBm refers to the ratio of decibels (dB) to milliwatts. The conversion of watts to dBm uses a complex formula but can be summarized as: 1 watt (or 1000mW) equals 30dBm. This way if you have a loss caused by the cable of a certain number of dBi (depending on the length of the cable can be 1 dbi per meter) but an antenna gain is 24 dBi from your antenna, the net effect is 22 dBi power level increase with a + 21 dbi antenna (with a 3 meter cable). To achieve maximum gain, use low loss cables and always with less loss than the dbi of the antenna.

The installation of the equipment is very simple, just install the antenna on the outside of the building and direct it to the point where we want to take the signal or signals that interest us. Then we must connect the antenna to the USB adapter AWUS036NEH using the antenna cable that has N connector for the satellite dish and RP-SMA connector for the WIFI adapter. If you want to extend this distance of 3 meters, you can connect a male SMA extension cable of the desired distance. Afterwards, the USB adapter can be connected to any computer with a USB cable.
Once installed the computer can connect to the internet receiving the signal from the other satellite dish that must be connected to the emitting router,
If we wish to distribute the received signal for several devices, we can connect the USB adapter with the RT3070 chip via its USB to a WLAN OpenWrt Silicon repeater signaling router. This special router has a USB port compatible with all the powerful WiFi antennas that use the RT3070 chip like the Alpha AWUS036NEH.
Components of PARTICULAR WIFI KIT
• 1 X Wi-Fi USB Card AWUS036NEH chip RT3070
• 1 X ALFA AGA-2424T Satellite Dish Antenna
• 1 X 3 meter cable N to RP-SMA converter

We recommend Alfa satellite dishes as the best wifi antenna to connect long distances from one house to another or for free public networks. There are two options: 2.4Ghz WiFi Satellite Dish AGA2424T and 5GHZ / 5.8Ghz AGA-5828T

This router connected to the USB WiFi adapter that receives the internet, can repeat the connection both Ethernet network cable, for several computers, and WiFi for the whole house that has been connected long distance with the WiFi dish.