In this tutorial we will explain how to install the driver for the Atheros AR9271 chip that carries the high power WIFI adapter Alfa Network AWUS036NHA. The process is based on the Atheros AR9271 driver, with which some users find special difficulty, but it is also valid for Driver RT3070 in Windows 10, or RTL8187, MT7106 and RT5370.

Powerful Wi-Fi USB antennas usually carry an RT3070, RT3072 or AR9271 chip. The difficulty to install them in versions of Windows 8 and Windows 10 can be solved with the advice of this article.

This process can be a bit tedious and complicated since the manufacturer of this chip has only published the Driver for Windows 7 and has not updated it. The reason why many manufacturers have not updated the drivers is that finally the Windows 10 version of Microsoft is compatible with all previous versions. That is to say that if your WIFI antenna carries the Windows 7 logo and the drivers CD for Windows 7, you can theoretically install it in Windows 8 / 8.1 / or Windows 10 and it also works.

The model on which we rely is the Alfa Network Powerful Antenna AWUS036NHA with chip AR9271. The goal is to install it on a Windows 8 / Windows 8.1 or Windows 10 computer with the driver completely compatible and running stable.

For these cases the Windows compatibility tool is used for previous versions.  Here we explain step by step the simplest and most effective way to do the installation well. 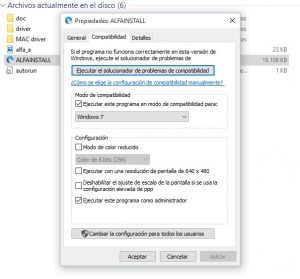 We let Windows restart and you’re done. The driver will be installed and will remain by default with absolute compatibility for Windows 10 always running as Windows 7.

In this link are the latest drivers for Alfa AWUS036NHA Atheros AR9271.

To make them work in Windows 10 you have to install the driver for Windows 7 in compatibility mode between Windows 10 and Windows 7 and run as administrator. With the steps described in this tutorial you can install virtually all the powerful WIFI antenna drivers in Windows 8 or Windows 10.