This review in 2017 of the famous WiFi antenna AWUS036H is justified as it is still one of the most widely used and desired WiFi adapters by a large number of fans developing applications for WiFi networks. Although the technology used has some limitations in terms of maximum download speed; all other factors, such as power and sensitivity, make it the most prominent WiFi adapter in recent years.
If we take into account that the driver published for this WiFI adapter is Windows 7, but that the installation in Windows 8 and Windows 10 is very easy and works completely stable, we can recommend this WiFi adapter AWUS036H in 2017 for some specific uses, that the result will be higher than that of other more modern cards. The recommendation in this review of this Wi-Fi card with RTL8187L chip for Windows is based on that since Windows 7, all subsequent versions of Windows allow compatibility with Windows 7 drivers or earlier.
To install the Realtek RTL8187 chip driver for the ALFA AWUS036H card in Windows 8 0 Windows 10 see this tutorial >>.

WiFi Adapter Alfa AWUS036H installed in Windows 10. With the Alfa WiFi Scanner software you can scan all the WiFi networks. It should be noted that the MAC of the card always starts with 00: C0: CA this number identifies the manufacturer Alfa Original.

As a purchase recommendation, in order to obtain a good result, you must always order original Alfa Network AWUS036H adapters. The original Alfa cards are identified by the ALFA logo and above all by the MAC number that begins with 00: C0: CA as the one of this original AWUS036H card tested in Siliceo Online Store.

This chip launched in 2009 became very famous among hackers and fans of the development of WiFi security applications since it is a chip 100% compatible with all WiFi security tools, both those that use monitor mode and pack injection.
The driver for RTL8187 is included in all Linux distributions for WiFi security as the most popular of Kali Linux, WiFiWay or Backtrack.
Most of the most modern chipset are also compatible with monitor mode but do not work well with packet injection like the Realtek RTL8187 chip does.
All versions of the RTL8187 / RTL878x / or RTL8187L chip that carries the ALFA AWUS036H work in the same way and have the same compatibility. In spite of the antiquity it is still the reference chipset for WiFi audits since it was the first high power manufactured chips that reaches up to 1000mW (30dBm) and that still works very well with the fundamental tools for wifi hacking (suite aircrack-ng, mdk3 , beini, etc. )

The AWUS036H has the RTL8187L chipset which is one of the most sensitive ever produced, for this reason it is the best for long distance using 802.11G WiFi networks. It is compatible with all 802.11G and 802.11B wireless access points Windows (XP, Vista , Win7, Win8, Win10 and later).
This USB WiFi card allows any laptop or PC with a USB port to scan and explore all the WiFi networks in the environment. Compatible with all WiFi security and encryption systems: 64-bit, 128-bit and 256-bit WEP; WPA, WPA2

If we want to establish a link even to more than 10 kilometers and we are going to use a Alfa AGA-2424T satellite dish to receive the 2.4Ghz frequency WiFi signal that emits a 10 km access point, we will need a very sensitive USB WiFi adapter and high power, which also does not suffer interference from other WiFi emissions along the way. The solution to this example is the ALFA AWUS036H V5 connected to the Alfa AGA2424T satellite dish.
The recommendation of this Wi-Fi card for long-distance connections is motivated precisely because when using the 2.4 Ghz type G frequency the wavelength is shorter and suffers much less interference than more modern adapters such as N. The WiFi wave G arrives further away and there is less signal loss using this G-type card than a similar N-type card, also if we use it with Linux at 1000mW output the result will be incredible.

If you live in a rural area and need to connect to a free WiFI Free that comes with little coverage, this is the most recommended card. In most cases we should not reject this WiFi G adapter at 54Mbps, thinking that the download speed will be low, since most of the current ADSL and fiber lines in Spain are between 10 and 50Mbps, and for normal use , (discarding the streaming video) the result with 54Mb will always be good.

It is recommended to buy this USB WiFi card AWUS036H together with the dish AGA-2424T. With this satellite dish used with the AWUS036h adapter with an output power of 500mW output, fully stable connections have been established over 50km with G protocol WiFi with this adapter RTL8187 ALFA chip, a record in WiFi connections difficult to beat. 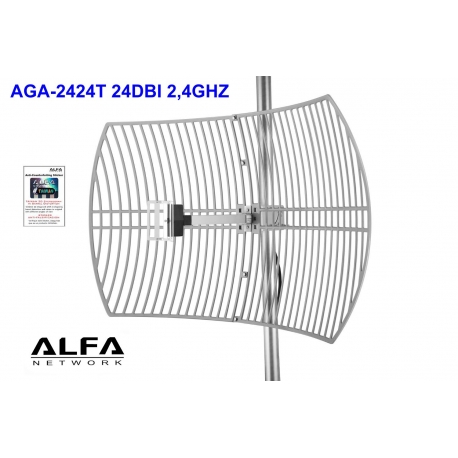 Parabolic AGA-2424T can be used with the adapter ALFA AWUS036H

Well you know our recommendation, if you want to try the famous AWUS036H you can buy the most powerful version V5 in this link of Siliceo Tienda. If you already know this product and are now interested in more modern ALFA brand antennas, we recommend this section of the store Alfa WiFi store Spain.

Use of Alfa WiFi antenna AWUS036H with OpenWRT USB router

If you have an unsupported MAC, tablet or device in which you can not install the drivers for this card, but still want to use it to connect long distance, we propose the most practical solution. You can connect this adapter ALFA AWUS036H to a router with USB port which has installed the drivers for WiFi chip RTL8187.

If you connect the WiFi adapter to the USB port, then you can use it at full power (1W) to scan networks and connect over long distances. The router will repeat the internet through a new WiFi network for the whole house.

Diagram of the ALFA AWUS036H xon Windows computer (up to Windows 10) or with OpenWRT router with compatible USB.

The firmware OpenWRT of this router allows you to select output power according to countries and up to 1000mW (1W) of WiFi power, so that you can get the most out of this WiFi adapter thanks to the OpenWRT firmwarwe SILICEO router.

The firmware of these OpenWrt router is compatible with all Wi-Fi cards with Chip RTL8187 like the ALFA AWUS036H. Take the Realtek drivers installed at the factory.