We all know what Wi-fi means, but so far it was not clear that there are various types of Wi-Fi that are differentiated mainly by the frequency they use and the maximum speed they support for this reason the Wi-Fi Alliance has announced that from 2021 , everything will be much clearer with the new commercial denominations.

This is good news for ordinary internet users,  the Wi-Fi Alliance has revealed that it is ditching its clunky Wi-Fi standard branding in favour of new labels Wi-Fi 4 Wi-Fi 5 and Wi-Fi6. The latest generation Wi-Fi standard, 802.11ax, becomes Wi-Fi 6, while older (but still more widely used).  802.11ac and 802.11n become Wi-Fi 5 and Wi-Fi 4, respectively. Anything that pre-dates 802.11n/Wi-Fi 4 are not officially renamed. The move is designed to help consumers better understand which Wi-Fi standard their devices support adding that it expects hardware manufacturers to begin adopting the simplified version numbering on its products in the immediate future, along with the newly revealed logos.

When these new denominations are on the street we will all be very clear that Wi-Fi 6 is faster than Wi-Fi 5.

Finally the Wi-Fi Alliance association in charge of defining and denominating the different Wi-Fi standards has taken into account the recommendations of the big manufacturers of Wi-Fi devices like Intel, Netgear and Mediatek, to make the great technology accessible For everyone with understandable names.

One of the clearest examples of why this change of denomination is necessary is what happens with Bluetooth technology. The Bluetooth standard corresponds 802.15 in the same way that Wi-Fi is 802.11, but Bluetooth versions are always 4.0 or 5.0. Similarly the next version of the 802.11 ax standard will be called Wi-Fi 6.

But the most surprising thing about this change is that it is done retroactively, the numbering will also replace the letters of the previous standards. Wi-Fi 802.11 ac is renamed Wi-Fi 5, and Wi-Fi 802.11 n will be Wi-Fi 4. Previous versions of 802.11 a, b and G will not be renamed as Wi-Fi 1, 2 and 3 retroactively as they are currently no longer used.

The first router and WiFi network cards with this new denomination are not yet available in 2021 but will be sold throughout the 2021 to the time the new Wi-Fi 6 (802.11 ax) will be extended that improves speed and efficiency using the dual-band 2, 4Ghz and 5Ghz.

Newcomer to SILICEO Online shop the new ASUS RT-AX88U AX6000 router. This high-end WiFi 6 router has it all. Take the new Wi-Fi 6 or 802.11 ax. ASUS RT-AX88U stands out for its novel technical features of simultaneous Dual band with Wi-Fi 6 (Wi-Fi AX). Through 2.4 GHz It is able to provide a speed up to 1.148 Mbps for more than 5 devices at once and 5 Gps for one device. The exterior has four MU-MIMO 4T4R antennas and the quadrature amplitude modulation 1024QAM which defaults to the 802.11 ax standard.

Compatible with ASUS AiMesh: ASUS Wi-Fi wireless system to provide high-speed Wi-Fi connections throughout the entire home. Increasing number of devices are taking Wi-Fi technology to the limit, by moving the 802.11 ax or Wi-Fi 6 standard includes technologies with future prospects, offering more efficient and much faster wireless connections. In addition the range distance of this router is multiplied by 3 respect, to previous versions of Wi-Fi.

The novelty of the Wi-Fi 6 for now only has been introduced in this type of high-end router like the ASUS. The most advanced WiFi customers on the 2021 are still the Wi-Fi 5 wifi USB antennas. This router can be combined with a high quality WiFi client like the new AWUS1900 WiFi USB antenna with WiFi 5 AC.

For example, if five WiFi client computers are connected by at the same time with this type of antennas each one of them would have assured the speed of 1GBps (1000Mbps) at the same time that is what allows the router Wi-Fi 6 ASUS. 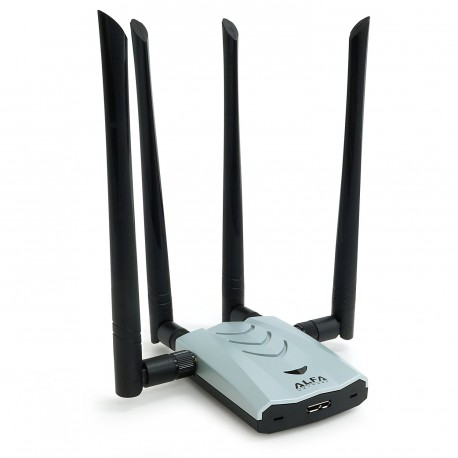 ➤ How to distinguish devices using Wi-Fi 6

Wi-Fi 6 can support speeds up to 1.1 Gbps on three or more devices at a time, while connecting a single device can reach speeds up to 5 Gbps. No doubt the Wi-Fi 6 is fully equipped to compete and surpass the new 5g telephony networks.

From 2021 the devices that Sena compatible with WiFi 6 will have recorded a “Wi-Fi Certified 6™” type certification.  In addition, there will be new drawings to identify it quickly.

Wi-Fi 6 is the achievement of a new nomenclature approach developed by the Wi-Fi Alliance that provides users with an easy-to-understand designation for Wi-Fi technology. The new name system will identify all generations of Wi-Fi by a numerical sequence that corresponds to the main advances in Wi-Fi. Product vendors will be able to use numeric names to identify the latest Wi-Fi technology that a device supports, operating system devices to identify the generation of Wi-Fi connection between a device and the network, and providers of Services to identify the capabilities of a Wi-Fi network.

Like all the improvements that so far have been introduced into the WiFi connection, the speed of the new Wi-Fi 6 reaches a transfer of 1, 1Gbit/s in the band of 2, 4GHz and 4, 8Gbit/s in the 5GHz band, therefore will allow the video transmission to 8k while the Wi-Fi 5 Allowed 4k video without cuts.

Another substantive improvement of the Wi-Fi 6 is better energy efficiency, less energy consumption allowing the batteries to last more and less consumption in households. In addition, new hardware that supports Wi-Fi 6 will be almost immune to interference to allow maximum performance even in saturated connection environments. For example, even in an airport full of people with mobile phones connected by Wi-Fi will allow fast connection speeds for everyone, while at home you can connect more than 20 devices at once, all with high speed transmission.. Sounds great, this breakthrough.

As has happened so far the new Wi-Fi 6 will be retrocompatible with the previous Wi-Fi computers that are the Wi-Fi 5 and Wi-Fi 4 which also work with the new Wi-Fi 6 router, but obviously not the old teams will not enjoy the maximum speed.

We believe that the new Wi-Fi names can only be good, since the old ones were considered quite complicated and difficult for most consumers to remember. Now, if you are considering buying a new WiFi router or PLC or trying to make the most of your USB Wi-Fi adapter, it will be much easier to know what Wi-Fi speeds it can handel.

Using compatible WiFi 6 devices, data can be transmitted to a single device at an incredible speed of 5 GBPS. This speed is five times faster than the 5g transmission that the telephony companies have announced. Also when several devices are connected at the same time through the same router, for example up to 5 devices This ensures at a speed higher than Gigabit WiFi for all of them.

If you want to leave comments or new news about the news of the WiFi technology, write it here and it will be published… ?